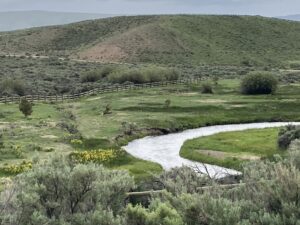 As part of my blog over the next months, I’m including a few stories about some of the towns or settings of my novels . . .including “Imperfect Promise” (Spur Winner and Will Rogers’ Silver Medallion Winner. Soon to be published will be my “Promise” Series; “Enduring Promise,” and “Lasting.”  Bannack is pivotal in “Enduring Promise.”

Having been to Bannack and neighboring Alder Gulch for my research, I’d like to share a bit of its history. Bannack had its start in 1862, and even though Lewis and Clark had camped nearby and named the creek, “Willard’s Creek,” John White, a placer miner, changed the name to “Grasshopper Creek” the grasshoppers were thick. Grasshopper Creek went on to be one of the top gold producing regions and the mining camp population swelled from 400 to 3,000. Today, many of the buildings are still standing. (Too many to name in this blog.) I was particularly taken by the Masonic Lodge which provided a room for the school.

Standing near the bank of the glittering and winding Grasshopper Creek, I imagined the placer characters and their sluices. The stories of the town and the people are abundant, and might easily fill many novels. You might want to read about Henry Plummer, both the crooked marshal and half-owner of a bakery. The dichotomy is that he was also a road agent and gang leader, responsible for robberies and killings. Vigilante justice prevailed and Plummer was hung on January 10, 1864. Today, many of the gold tailings can still be seen. This is a town worth visiting and reading about and located in beautiful southwestern Montana.