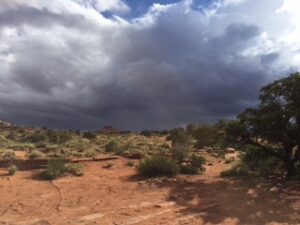 Life on the Great Plains during the 1880’s was unforgiving on good days. However, the 1881 string of blizzards through Nebraska, Minnesota, and Kansas were particularly deadly. And economically, cattle died by the thousands during this well documented event. Laura Ingalls Wilder recounted this event in “The Long Winter.”

During 1880 saw the “Great Gale” during which thousands of acres of forest were flattened in the Northwest. Most authors have read the story of the “Schoolchildren’s Blizzard” which occurred in January of 1888. The temperature dropped 100 degrees in 24 hours. Many of the parents wrung their hands and paced tiny farm houses; or attempted rescue.

During 1877, Wichita, Kansas was flooded by the Little Arkansas River, turning the small town into a devastating loss. Moreover, the good rains of 1874 promised a great harvest for farmers of the Rocky Mountains until that summer produced a drought, bringing on a plague of locusts. Swatting at insects, swiping sweat from a face, and running for a root cellar, help bring a story to more life than you may think.

The point is, writing historical fiction can’t escape the weather. Authors can fictionalize the settings and even the weather; but sometimes the weather makes a good story on its own.

My April blog:  How diseases, plagues, and epidemics can craft a story and plot.